Being able to conceive and to experience the joy of parenthood is everyone's dream. While for some, it's very easy and effortless to be parents, some couples struggle a lot! Fertility problems have been on an increase due to the advent of technology and the busy sedentary lifestyle. Yet there are numerous myths about male fertility that have made way into our minds! These myths often cause stress and pressure in men who are having hard time in conceiving. Here are some most common myths about male fertility that needs to be busted today! Read on!

It's a myth! There's no such evidence which confirms that conceiving second or third child becomes much easier than the first child. Second infertility is also as common as the primary infertility where men find it difficult to be able to conceive. Conceiving first child is no way a proof that should convince anyone that the future conceptions will become much easier.

2) The ability to conceive depends upon the position of sex

3) Men do not have any biological clock like women

We're all probably aware that women have biological clock. That is, there is a certain age after which a woman stops menstruating, and thus will not be able to conceive. Many believe that this rule applies only to women! But the fact is men have their biological clocks too! After attaining a certain age, say 55, men will not be able to conceive healthy children although they can still ejaculate. There have been very rare cases where men became fathers at the age of 60+. The children who are born where the fathers are above 55 years of age are often born with serious physical health problems owing to the low quality of sperms.

4) There is no cure for male infertility

While it is quite disappointing to know that the sperm count in the Indian men had dropped by quarter in the past 50 years, we must note that humanity still has hopes! Because out of these men, 95% of them could be cured. So if you or your partner is facing infertility problem, don't break your heart thinking there's no cure! Break the myth and approach a IVF centre. Infertility is caused by various reasons and most of them are curable! So don't shy away from seeing your doctor.

Those were some of the most common myths that needs to be busted today! There's already enough pressure on the person who has infertility issues, these myths shouldn't add to their woes! Don't trust what your friends say about infertility but trust the doctors who are experts in what they do!

Ok, in case you are looking for me

I'll be hanging out at the bottom of the screen! We Make fertility care affordable.
Being Parent - Tough Job
& We want to give you 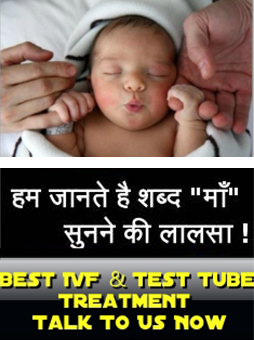 Request a Video Consult from your Phone